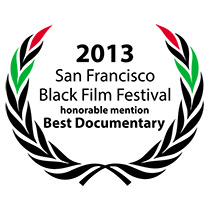 This summer, Killer B3 screened at the 15th Annual San Francisco Black Film Festival (SFBFF).  What a great experience.

The SFBFF is held at several venues in and near San Francisco's artistic rich Filmore District.  We just read an article that said, less than 5% of all films entered in film festivals are actually accepted.  Needless to say, we are honored to screen at any venue.
Killer B3 screened at the Boom Boom Room, a really cool and eclectic music club a stones throw from the historic Filmore Theater.  The Boom Boom Room used to be owned by blues legend, Johnny Lee Hooker.  The bar is one of few clubs anywhere that has a Hammond B3 Organ permanently on site.  Bands love it! Now, they don't have to lug their Hammond to the gig.
A lot of cool things happened during the SFBFF.  First, we won our first festival award.  Yep, Killer B3 is officially an award-winning film.  Killer B3 was awarded Honorary Mention for Best Documentary.  We didn't win the top spot, but we are proud to have the film recognized for being one of the best in the fest.
The team at SFBFF sent us a nice awards packet.  It came in a vintage film case.  Inside was tons of cool things we will treasure.  Thank you SFBFF for a wonderful four days in one of the greatest cities anywhere in the world.
I got a chance to meet some really cool people during the San Francisco trip.  I'm learning, you find your own little crew to hang out with at these festivals.
You would think, as producer of Killer B3, we probably have met everybody featured in the documentary.  Not true.  Pete Fallico is someone who has helped us immensely with the production of Killer B3.  In fact, Pete has been invaluable.  After eight years of working on Killer B3, we had never met Pete.  Pete's interview was shot as a favor by my long time friend, Stan Pechner.  Stan lives in the S.F. Bay area and so does Pete.
Needless to say, I was excited to meet Pete at the SFBFF screening.  Pete said the film was incredible.  He said he was really impressed with everything, especially the editing around all the music featured in the film.  He also said we nailed it by paying such great detail to Jimmy Smith's contribution to the Hammond sound.
See you at the New Jersey Film Festival on September 8, 2013.
Posted by Murv Seymour at 11:14 AM No comments:

Killer B3 Screening Near You

It's been a minute since our last post.  It's always been our intent to keep this blog updated.  But, it's been tough to manage all the different elements of Killer B3 as things continue to grow.  We're not complaining, we're just sorry to keep you waiting.
Since October, Killer B3 has been selected to three film festivals.  In March, we made our world debut in our own backyard at the Gasparilla International Film Festival (GIFF) in Tampa, Florida.  GIFF was recently voted one of the top 25 film festivals worth attending by Moviemaker Magazine.
We screened to a sold out house at CineBistro Theater.  It was amazing!  What a great venue to watch a movie.  It's like watching a flick from the couch, or your favorite chair at home.  We were emotionally touched to see people receive Killer B3 with laughter, tears and overall joy.
Our buddies Jay Nolan and Gene Yagle snapped a few shots of the historic day for us.  Overall, we couldn't be happier with our experience at Gasparilla.
One of the coolest things about our GIFF screening, actor Colin Farrell was posted up on the red carpet immediately after our screening.  Yea, we shared the red carpet with a Hollywood star, sort of.  Lol.  Farrel made a surprise visit to GIFF to support a film produced by one of his friends.
In June, Killer B3 screened at the San Francisco Black Film Festival (SFBFF).  Because of budget restraints, Joe didn't make the trip.
SFBFF is held in the incredible Filmore District of S.F.  What a cool place.  It's so filled with the artistic vibe.  You've got the Filmore Theater.   There's Yoshi's Sushi and Jazz Club.  There is also tons of great food venues on Filmore.  One of our popular Killer B3 stickers is hopefully a permanent fixture on the back stage door at the Filmore. 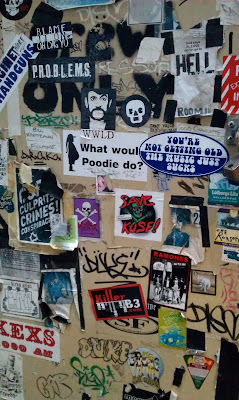 Festival volunteer Greg "Dread" gave me and Killer B3 cameraman Stan Pechner a VIP tour of the historic venue.  "Dread" used to work there, and still does from time to time.
Killer B3 was screened at Johnny Lee Hooker's former blues club, the Boom Boom Room.  Organizers thought it was a perfect spot to screen because the club has a great history with the Hammond organ.  The club has an in-house Hammond B3 so traveling musicians don't have to lug theirs to the club.
Killer B3 was screened twice over the SFBFF weekend.  I gave out Killer B3 T-shirts to various people.  It's a cool way to promote because the shirt gets people talking about your project.
We had a larger turnout for our Saturday afternoon showing.  Both audiences were filled with fans of the instrument and fans of the SBFF. 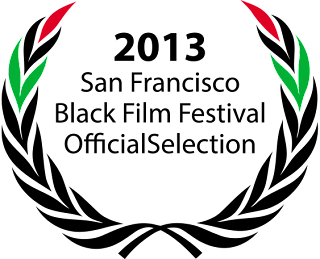 Killer B3 received Honorary Mention for Best Documentary at the SFBFF.  This is obviously a big deal for us.

Pete Fallico attended our SFBFF screening.  Pete is a S.F. Bay area radio programmer, concert promoter and President of the Jazz Organ Fellowship.  We would have never been able to produce Killer B3 without Pete's helping hand.  You can see it firmly planted on my shoulder.
It's important to meet and chat with as many people as you can at these festivals because other filmmakers provide tons of tips on how to work the festival circuit.  They tell you things nobody else tells you about film festivals.
Yes, the Makeout Room is the real name of the a nightclub.  And no, I didn't make out!  Wait a minute...

Posted by Murv Seymour at 12:50 AM No comments: