"Killer B3" Travels to New York to Meet Hammond B3 Legend Jimmy McGriff - Plus New Video!

We have a lot of exciting things happening with "Killer B3." Joe and I just spent five days in New York City getting close with one of the Hammond B3's greatest legends, Jimmy McGriff. 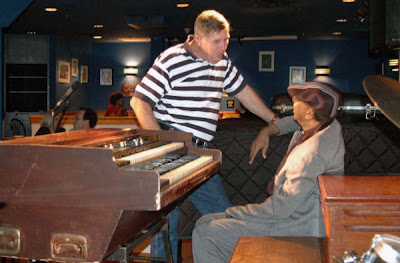 It was a life changing trip for everyone. We not only had an opportunity to get some great elements for the documentary, but we really got a chance to know Jimmy McGriff a lot better.

While Jimmy has some health issues, he still finds the strength to wiggle his fingers on the B3. His wife says anytime Jimmy performs at a show it helps his spirit. She told me it gives him something to look forward to even though he can't play like he used to.

Our trip to New York also brought us together with Dr. Lonnie Smith. Dr. Lonnie is one of the most expressive musicians to film and most thought provoking people to talk to. Dr. Lonnie was gracious
enough to take a picture with me right after one of the late shows. I found out Dr. Lonnie is a big fan of comedy. Since I am also a stand-up comedian, I'm sending Dr. Lonnie my live comedy CD.
I hope he likes it. 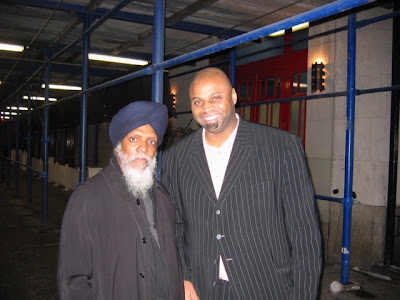 Hammond B3 player Shawn Brown and saxophone player Mike McAuther also made the trip to New York. They even got a chance to jam on the same stage as Jimmy McGriff, Dr. Lonnie and Rubin Wilson. It was a night full of amazing performances. You get a chance to check it out in the documentary.

We found a little time to hang out and get to know the Big Apple. I could have taken a job at a top television station in New York about 10 years ago. I've always wondered if passing up that gig was the right decision. After being in New York for just a few hours I realized some of why I didn't take the job.

While I love the culture and the great things that go on in New York, I had a tough time dealing with the cold weather. I had an even tougher time getting used to waiving down a taxi cab. अत times I felt like I was hitch hiking! We did learn after a day or two that living in New York is all about finding that place or space where you're comfortable. We did find a few places that were really cool.

Anyway, we're getting ready to get heavy into logging the 150 or so hours of tape we've shot for "Killer B3". It wont be fun, it wont be pretty, but it's got to be done and it will be worth it! 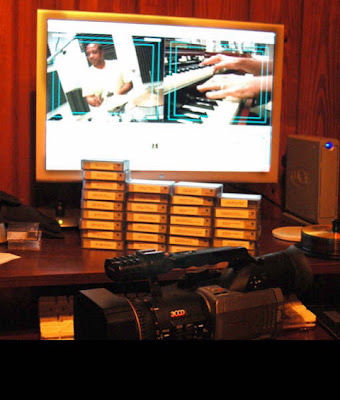 We'll keep you posted on our website www.killerb3.com. It's being built as we speak or should I say blog. Please checkout our youtube channel @ www.youtube.com/killerb3themovie for exclusive clips from Killer B3.  Also, like us on Facebook @ www.facebook.com/killerb3. For those of you still hanging on to myspace, we've got a pretty cool
clip of Shawn Brown up on there that is getting great feedback. We've even added a new clip in this blog.

We'll holla at you later and I'll keep you posted on what's new and exciting.
Peace,
Murv & Joe - "Killer B3"

Hammond B3 Documentary in Production 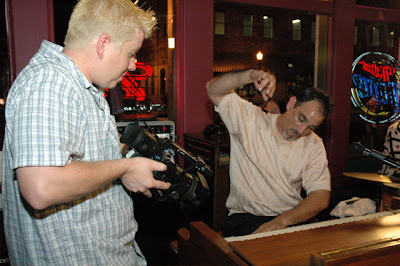 Our apologies to those of you who have been trying to find this blog for the past few days. For some reason the blog just disappeared and it's taken a day or two to figure out the problem. We've also lost the ability to post photos on the blog for the time being.

If you love music and are inspired by those connected to it, you'll love "Killer B3." "Killer B3" is a documentary film about one of the most complicated instruments in the world, the Hammond B3 Organ. This film introduces you to many influential and accomplished Hammond B3 musicians. Also, a look behind the scenes at the amazing technology used to create the Hammond B3 and the story of an aging and literally dying breed of B3 players makes "Killer B3" a must see project that is long overdue.

Joe Bamford and I (Murv Seymour) have been documenting the history and future of the Hammond B3 Organ for more than two years. Joe has over 15 years of experience as a videographer and editor and I have a 20 year background as a television reporter. We have an unstoppable passion to tell the story of the Hammond B3 and the people that breath life into this one of a kind organ.

From its name, you probably know nothing about the Hammond B3 Organ. But once you hear its screaming sound or see its unique table like legs, you'll never forget it. The sound of the Hammond B3 Organ can be subtle or strong and is present in gospel, blues, jazz, rock, reggae, soap operas, and many other styles of music. 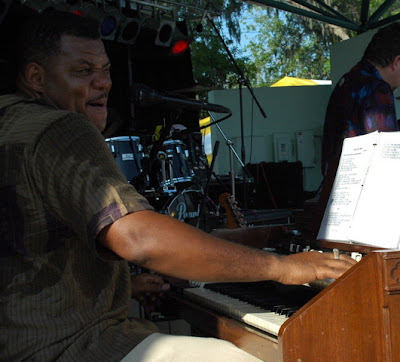 We're in the early stages of putting the word out about "Killer B3." We definitely need the support of all Hammond B3 fans and music lovers. We're new to blogging, but are going to try and keep everyone informed about the progress of this great project.